Limavady jazz and blues what can I say Northern Ireland is beautiful in the sunshine, 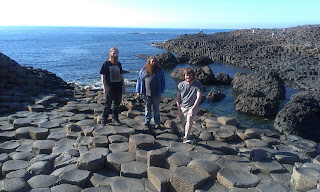 we were told that we had to get all our stuff in before eight as the streets were going to be
closed off for the “parade”.  So we dropped off the gear and checked into our hotel and
asked the lady at the desk about the parade “was it for the festival,?”we asked” would there
be like, majorettes and floats and so forth?” The poor woman didn't know what to say she
just looked at us as if we were dumber than a bag of hammers, and then the penny dropped.
It wasn't that sort of parade. We headed in and parked up, and watched as band after
marching band went down the street, there wasn't a sinner to be seen apart from us and the
police making sure everything was ok. No one cared as fifty bands  went round the roads for
hours and hours banging there drums, no one watched, no one gave a shit! 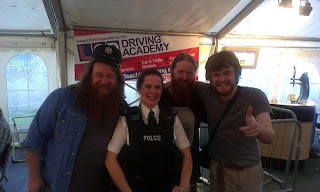 And we went to the giants causeway, because it was so near us and looking now at the photos we all
know where the pies went ,  we met Cara Rose and Cormac, and ate loads of ice cream.  I got up today and went outside, what is this stuff falling on me from the sky, Oh yes I remember now, rain.
Posted by Crow Black Chicken at 08:47