Mullingar and Warrenpoint Blues on the Bay weekend.

Well there we were off to the life festival armed to the teeth with enough boxes of wine
and flagons of cider to make diagio throw in the towel with the responsible drinking ads.  ,
We didn't bother with the ould car park instead opting to abandon the van in the temporary
drop off point, Grand and handy, for bringing in all the gear and escaping after. We were
playing on the human music stage, and had a lovely time hanging around by the lake, until
Stephen started a stone skimming competition and half the country were fecking rocks into
the lake. 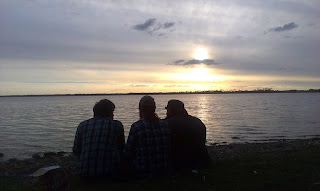 We did our gig it was great crack. After I met this Canadian young fella who had
recorded the gig and had some curious problems going on with his lips. Then I was tired and
decided to go to bed,in my tent, where I came to the conclusion that I hate fucking camping!
Of course camping at a dance festival is like camping in a war zone, no wonder people take
drugs. Stephen and Gev went off into the night and legend has it that no matter how old
you get rolling down a big hill all night is still great entertainment. Oh and they found some
thrones and a statue of a lion  where they had a great time pretending they were in Narnia. 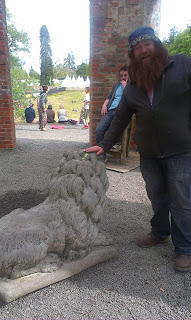 The next day we went to our Pat Freemans for stew it was a nice change from the
chips,and somewhere along the line we acquire a bottle of poiteen for rubbing down the
greyhounds!’We played Daly’s in Mullingar and got towels to mop up our sweat very nice,
Then we were off to Warren point. Where they DO accept euros but don’t give you any
FUCKING CHANGE. We caught  a bit of Pat Macmanus’s  (Who is a guitar god) set and I
bought some T-shirts and stuff from Mrs Pat who is wonderful!.We did our gig and it was like
Charlies on a Saturday night, which for those of you that don’t know what I’m talking about,
is a good thing?  When it was all over I hit the road for Cork and the boys, went looking for
Carvin motherfuckin Jones to get Carvinated which they did. 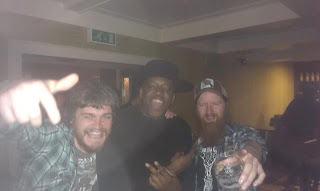 By the way the best way to keep awake on the long drive home after the gig is to get the hottest coffee you can buy and spill all over your crotch.
Posted by Crow Black Chicken at 08:36