My son and I were driving home the other day and saw a mink run across the road, I think
they were brought in to the country so people could make fur coats out of them.but they
somehow got loose and bred in the wild. Very nice looking but you wouldn't fancy one
shooting up the leg of your pants. 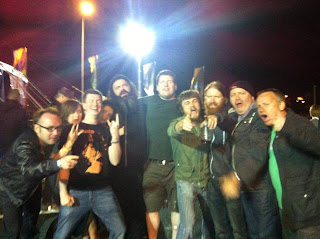 Gev and Stephen got up to Ballyshannon of the Friday
and had a great time in the marquee with Johnny Gallagher Bundoran’s most famous son
and Christian Volksmann who often sits in with us and is a black belt on the harmonica and
a damn nice fella At the gables.The Mark Black band was first up,It was great to be able to
sit in the street and have the craic, Oh and it wasn’t pissing rain like it usually is in an Irish
outdoor event, Then we did our turn, the audience was great and a big thanks to Mark and
co for letting us use their stuff. 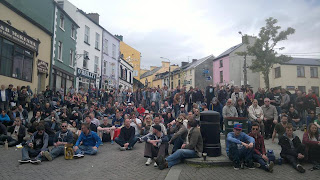 The next day I parked the van in a lane near the owen roe, I thought this was fierce handy for loading in later, after a few hours I came back to find it sitting in a lake of piss, I’d left it just far enough away from the wall for folks to be able to go to the loo and preserve their modesty, I even pass it at one stage and there was a handbag up on the windscreen with a hand still attached belonging to someone stooping down behind
our van, It would have been a good idea to have had  armitage shanks printed on the side.
We met Rob and Dan, they liked our band so much they were plotting to take me and
Stephen out, Rob had already learned two of our songs and Dan who just started learning
the bass badly wanted Stephen Aerodine, Gev was safe as they needed a drummer and
they knew not to mess with the Barretts.  We met a big crew from Kilcullen and had laugh
and met up with our pals jimmy and pat from Cavan who know where the best Italian cuisine
was to be had in ballyshannon, which we had alfresco, which means we had fish and chips
sitting on some steps in the street, The Rory fest was insane, and everyone thought they
needed a liver transplant after it. 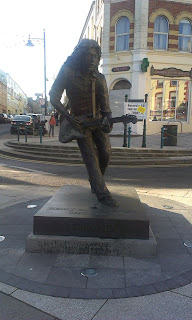 Posted by Crow Black Chicken at 08:42