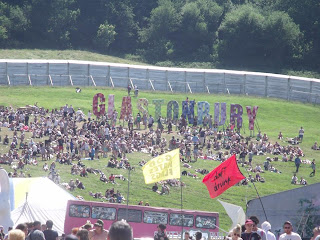 What the fuck is wrong with me, It's Tuesday and I'm heading for Glastonbury until the following Tuesday
I'll be sleeping on the cold hard ground in a fucking tent slobbering around in the muck  with three hundred thousand  others. I have to say I love the complete sensory overload that is Glastonbury, but for me the toilet situation was a big problem. I learned a lot about myself in the Glastonbury loo. For the first three days I couldn't go at all and then I was bursting but the moment I went in the toilet I couldn't go. And for the first couple of days the loos were not even that bad, but there's no loo like your own loo, right! Eventually, desperation got the better of me and I could try three or four toilets before settling on one that I could use, and only then whilst holding my nose. after doing the biz I would end up almost falling out the door gagging, and gasping for air. It occurred to me that standards change when you live in a field for a week, as I made a cheese sandwich using a wellington boot as a handy sort of work station for my ingredients.

The sun shone for most of the time , and we had our gigs in the fluffy rock café, and thanks to Darren I had a lend of a lovely fender bassman. Dennis just Dennis was a great MC, and a renowned poet and hopeless romantic the world needs more of those,and we found a lovely place to get curry called Ghandis flipflop so we ate there everyday. I met this mad welsh fella who came over wanting a photo with the beard, like it was a prize winning sheep or something. He told me he was from North Wales and that his Prince was not Charles but Owen Glendower of course I was lapping this up, I love the fact that Owen Glendower lived in the 15th century, Then a strange English bloke joined into the conversation, It was surreal, when the English guy wouldn't admit to being English, he said he was from all over, from lots of different places then he entertained me by telling me loads of Paddy jokes, I swear I didn't know whether to laugh or beat him around the place with one of his berkinstocks. But I'm a lover not a fighter so I left it off. 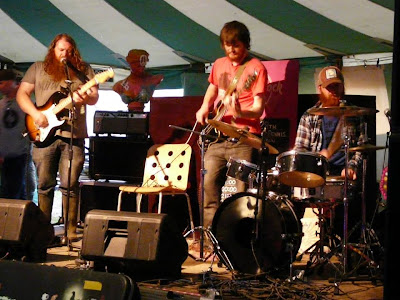 We met loads of our Cavan pals and it really made it nice for us to hook up with them and I got interviewed by some confused people when I told them that I was Keith Allen, lived in Monaghan, bred rare pigs, and used to run the flatlakes festival, but packed it in cos every other bugger decided to put on a festival when mine was on. I think they nearly believed me.

Now I'm not one for exercise unless its exercising my mouth, so all the walking around had a devastating effect on my feet, which resembled a couple of hams after a few days, and I finally saw shangrila  but nearly had to get a piggy back from Sharon O Brien to get back to the tent.

By the loos, there was a tap for people to fill water bottles and some folks were showering under them too, I was filling my water bottle  and saw a pair of togs on the ground, Some one said" My goodness the water pressure is really strong"" I know" I said" look it blew the knickers off someone".

A high point was getting to see the stones, I was expecting them to be a shadow of their former selves, but they were fantastic, and the songs are great. I was never in such a massive crowd there must have been over a hundred thousand people watching the stones, our pals Jimmy and Pat spent hours waiting up the front for the stones and I heard some lunatic had a piss on loads of people in the audience, glad it wasn't near where I was.
Security was very high, when entering and leaving the festival, an when you wanted to get stuff from your car they checked your wrist band and I nearly got into a fight with some security guy cos I thought he was trying to take my wristband instead of just checking it. Everyone thought it was very amusing, but I wasn't fucking laughing. 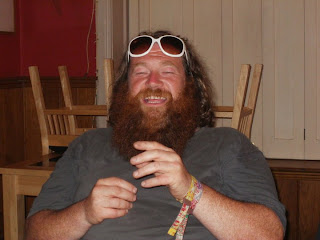 When our gigs were all over there was a ban on vehicles driving around the site so we had to carry all our stuff out to the car park using a trolly and a wheel barrow it was a tough going and on the way back I gave Mark from the Fluffy Rock gang a spin on the trolly. Then he gave me a spin on the trolly, which was much funnier as I'm twenty stone and he was wearing flipflops then we had a race with Russ who was pushing the wheel barrow which was good fun, although it could have ended in tears. 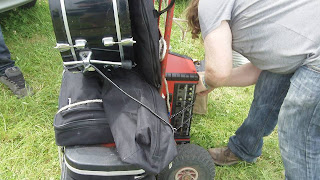 Any way it work out fine and we left glasto, at three am on Monday morning and headed for Salisbury to see Stonehenge before we went home, but when we got there the road was blocked and that was that. I heard a rumor that they did this in anticipation of people coming from Glastonbury and that they don't like that sort around their national monuments. I couldn't help thinking if it were Ireland they would be fellas flogging you Wexford strawberries for a five mile radius ,and when you got in they would have made another few bob out of you,  by the time you'd have seen any old stones, you would have  pain in your hand from lashing out, but at least we're not SNOBS!!!

Anyway Glastonbury is the real deal, and we loved it, I hope we get to go again next year
Posted by Crow Black Chicken at 05:16 2 comments: